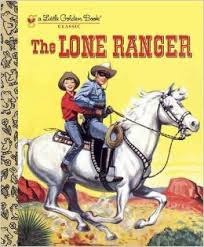 This has been a week of listening to stories.

This has been a week of telling stories.

This has been a week of watching stories take shape.

This has been a week of watching history distort, change, and become clear.

Sometimes, looking at the world with a storyteller's eyes is frustrating. You see stories morphing and changing, and you wonder if anyone else is seeing it like that. I see the streams and stamps of stories everywhere, and I don't want to just talk about a single event, but all of the story that preceded it. That makes it hard to find words at times.


On Saturday, I was at one of the Women's Marches with two of my friends. I didn't bring a sign. I wanted to take pictures, talk to women, and find out why other people decided to come. I wanted to catalog my favorite signs, listen to the chanting, and see who turned out.

Arianna Ross and Linda Gorham, two wonderful tellers, were with me, and we had a great time. Each of us, at times, was in deep conversation with someone around us. Going to something like this with storytellers is cool.

Before the march began, there was a woman standing next to me with a little blonde boy. He was three. His shirt said, "Feminist In Training". He was not having it. He was upset and fussing. Not crying, but making that annoyed child sound in that pitch that just makes you wish you had earplugs. 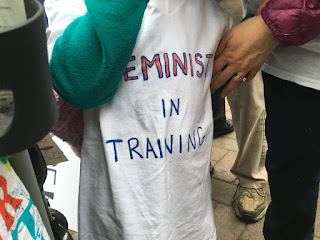 I dropped to my knees and told him Johnny and Suzy thumb. He was mesmerized from the first second. He watched my thumbs, listened to my voice, and was completely silent and smiling by the end. I stood up and he kept smiling. In fact, he didn't make that noise the rest of the time we were near them. Every now and then I'd look over and he'd be looking at me. Whenever I caught his big blue eyes he'd flash me a big grin and then snuggle close to his mother.

I told his mother that the three of us were storytellers...professional storytellers. We made a few jokes. "Have Stories Will Travel" or some such thing, and then we moved on in the march.

Guerrilla storytelling can always be a useful thing.

During the march, I heard lots of personal stories. I heard about women who'd driven to Raleigh from other states instead of heading to Washington DC. I heard from women who had items of clothing or names of women who couldn't march, but wanted something of theirs there. I heard stories about cancer survivors, women who were encountering others of different ethnicities for the first time in years, listened in on a conversation between a black woman and a white woman where the black woman explained that she no longer tries to talk to white people about her activism all the while talking to this white woman about her activism. The white woman was fascinated, and begged to know more about the activism and why the black woman had disengaged. At the end, they hugged each other and went back to their various groups. I saw lesbians out holding hands and kissing. I saw gay men holding hands and cheering. I saw some fabulous signs. I saw lots of kids. I saw women live streaming their experience for daughters, sons, other women and husbands or boyfriends who couldn't be there. I met photographers, journalists, moms, children, gentlemen from all walks of life, and I listened to them.

There was also the backlash. There were people who were angry or confused about why so many women came out to march. There were the people who derided the marchers, called them names and said they were stupid or hysterical or foolish.

Senator Joyce Krawiec of North Carolina had this to say about the women's march.“Message to crazies @ Women’s March – If Brains were lard, you couldn’t grease a small skillet. You know who you are.”

It made me think about stories.

-What stories do you have to believe to decide to spend a chilly Saturday marching? (Actually, it was a nice leisurely stroll)

-What stories do you have to believe to decide that insulting the marchers is the way to go?

-What stories do you have to believe to announce that George Soros paid most of the women to march?

-What stories do you have to believe to feel excited by watching three to four million women protest something?

-What stories do you have to believe to feel disgusted, threatened or angered watching three to four million women protest something?

The stories we believe have a huge impact on what we see when we look at the world. If you believe something is true and you see something that does not conform to the story you believe you have some options.

A) You can accept the new story, or at least try to understand it.

B) You can reject the empirical evidence of the new story and dismiss it.

C) You can just tell a completely different story in place of the one you are observing and substitute that new story for reality.

D) You can reshape the new story so that it conforms with societal norms no matter what the actual story might be.

Why does any of that matter, and how does this impact what happened last weekend? Last year? Last Decade?

We have always reshaped our stories. George Washington chopped down the cherry tree, and he couldn't tell a lie. You know, the stuff we proclaim that isn't true, but we repeat over and over again.

Sometimes, however, when we reshape or try to reshape our stories, we run into problems. Here are two examples of stories that we tried to shape. In one instance we failed, and in the other, we succeeded too well.

"A controversial bronze statue planned for Fire Department headquarters was scrapped yesterday after angry protests from firefighters. The statue was based on a photograph of three white firefighters raising an American flag amid the World Trade Center rubble. But the artist hired to cast the $180,000 statue used one black, one Latino and one white fireman, prompting firefighters to accuse the FDNY of abandoning historical accuracy for political correctness. "We heard the reaction of the firefighters, and we decided to take another look at it," Fire Commissioner Nicholas Scoppetta told the Daily News. "I was not there when the original decision was made, but now it's my responsibility to come up with something appropriate, and that's what we are going to do."


I remember the flap about this. The artist was trying to say something about how 9/11 was a national tragedy, and these firefighters represented all of us. The story was meant to be uplifting and one of shared sorrow and hope. The pushback on that was immediate.  The original designs lost. 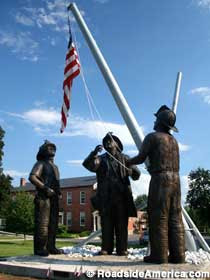 That does not mean there is no statue. In fact, there is a statue depicting the three white firefighters. Unfortunately, there was a bit of a problem.


"...The statue’s dedication marked the end of its saga — until recently, when it was reported that the statue’s construction was financed by investor fraud. A company named Coadum Advisors gave Watts $300,000 in 2006 to build the statue, which then was valued at $4.8 million and which Coadum hoped to write off its taxes. The SEC now says that Coadum was just a Ponzi scheme, using money from new investors to pay off earlier ones and pocketing the difference.
The SEC can’t seize Coadum’s almost $19 million in offshore accounts. But it’s seized the statue, and is looking for someone to buy it so that Coadum’s investors can get some of their money back."


This statue ended up on the FEMA training camp grounds in Emmitsburg, MD. I had no idea how this story ended when I started researching this in the morning. A moment that was originally meant to be memorialized for the nation ended up as the end result of fraud, greed, and acrimony. However, it does accurately depict three white guys raising a flag.

The second story that came to mind was a new one for me.

My uncle told me about watching the Lone Ranger at the picture show with his grandfather when he was just a boy. They had to sit in the balcony because that was the colored section of the movie house. He loved the film.

I remember watching the Lone Ranger on television when I was a kid. The show was in reruns at that point, but I did love it.

The Lone Ranger was this uncomplicated hero who was out there keeping the west safe from outlaws and evildoers. He was a strong man. He was a courageous man. He was what the American Man of Action and Mystery was all about.

I just found out that The Lone Ranger who shaped so many young men's fantasies of justice and power was based on a black man.

I found that really hard to believe.


Bass Reeves (July 1838 – 12 January 1910) was one of the first black Deputy U.S. Marshals west of the Mississippi River, working mostly in Arkansas and the Oklahoma Territory. During his long career, he was credited with arresting over 3,000 felons and shot and killed fourteen outlaws in self-defense.

I think about all the little black boys who could have grown up for generations with one of our huge culutral icons being a black man who was brave, strong, unafraid to stand against evil, handsome and a complete badass. A real live gun slinging superhero who was part of the fabric of the old west was just like them.

Maybe it is time to recast that story and tell it again. Hmmm.

Does it matter if our stories depict real things?

Does it matter if our stories are understood?

Does it matter if we have different reasons for telling those stories?

Does it matter if we see the same things and come away with different images?

Does it matter whether or not the stories we tell ourselves as a nation are true?

The only thing I am sure of in all of this is that it matters that we listen. 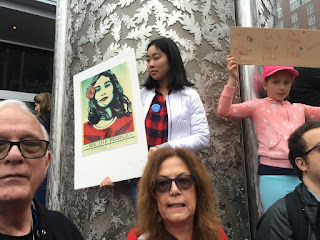 
What I am asking is a hard thing. Especially if we think we already know what we are hearing before the sounds ever reach our ears.