We Are Our Stories - Nothing More. Nothing Less. I love doing sets that challenge audiences when I work in schools. I'm always trying to challenge them linguistically and developmentally. I try to challenge their imagination and their assumptions.

We are the sum of the stories we believe, and the stories we reject. We can't incorporate any story into our world view we haven't heard. As a storyteller, I try to expose people to as many stories as I can!

Nobody should be shocked that we are the stories we believe. We start teaching our children the story of who we are, and who we expect them to be as soon as they arrive. We also tell them who everyone else is.

As we go through life, those stories come back to haunt us. They shape what we see and how we interact with people. They close us or open us. We cannot escape them, and often we don't even question them.

Yesterday I was in a school that had an interesting population. They have everything from kids who live in gated communities with million dollar homes, kids who are bussed in from government housing to kids who live on a Reservation.

I asked the principal if he would like the Trouble set or the Social set. He listened to the descriptions and announced, "Both."

He said, "Both," and started laughing.

The kids really enjoyed Brer Possum and the Snake, but they were over the moon for The Debate in Sign Language.

They were shocked at the callousness of the king, the foolishness of his behavior, and his nonsense assertion that the only people who were worth anything were the rich and beautiful.

They loved the ending, and most of them said it was their favorite story. The teachers who saw me before I left the school felt compelled to tell me that the last story was perfect because of the population of their school. I just nodded.

Today, I was in a school that I visit every single time I am in the area. I wasn't here last year, and all the teachers let me know that they noted that I didn't come. The principal told me that as soon as they saw my name on the list they booked me this year. It is an arts school, and I have now seen every single kid at that k - 6th school at least once!

With such a seasoned storytelling audience, you can tell interesting stories. So, I broke out Clever Manka.

(The version I tell is not the written one here. It is a compilation of several of these clever girl tales, but this is a good variant of the one I know.)

I begin by telling them that I was potty trained in front of Sesame Street. I explain that I loved Prairie Dawn because she was saying things to girls nobody else was. She said girls were smart, and strong, and capable. I explained that when I was a little girl, most people were telling girls if they were too smart, nobody would ever love them. Smart girls were always shown to be alone, teased, unloved, and every other thing until they stopped trying to be so smart and looked pretty.

The kids were shocked that this could have been true. They couldn't imagine it. I asked them what year women got to vote. It took five minutes of guessing before someone finally remembered it was 1920.

I told them that from 1776 to 1920, women in the country had been unable to make decisions that really affected our government.

Then, I went into Clever Manka. The refrain I use in that tale?

"Nothing good ever comes of women who are clever!

As I was leaving today, one of the girls turned to me and said, "Girl Power!"

I don't remember what I was thinking about when I was in fourth grade, but I am pretty sure it wasn't girl power.

There are so many stories that tell us that acting with knowledge can change the world for good one decision or action at a time, just as acting in ignorance can destroy beautiful things.

We change the world and ourselves for good or ill because of the stories we believe and those we reject.

I am just a storyteller. All I can do is try to offer up stories so that we can see each other and ourselves in different ways.

I want to believe it is possible to see each other and accept that we are not all the same and that is perfectly fine.

Some days I am daunted by that. Today? 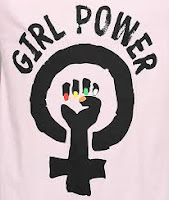