Dragging performance into play: a quick look at storytelling games by Kevin Kulp

You probably haven't heard of the many rules-light, storytelling-heavy card and roleplaying games that hit the market over the last decade. There are lots of them, and some are incredibly good.

If you want to get three or four friends together to create communal stories from scratch, or stealthily get teenagers hooked on storytelling, these games are the way to go.

Here are three of my favorites. 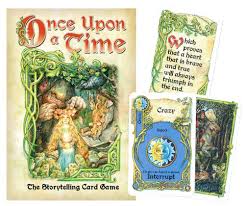 Best for: families, kids, and those who love fairy tales

In this fast collaborative family game the starting player builds a fairy tale, playing plot elements from the cards in her hand and creatively guiding the story towards her own Ending card. Other players use their cards to steal the story's narrative, changing it a little or a lot to fit their own cards instead. The winner is the player who uses all of her cards first. The result is a wonderfully disjointed fairy tale created over 30 minutes, built communally and full of unexpected turns. 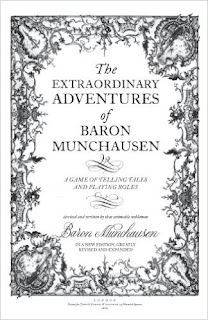 Best for: adults, the quick-witted, and those who love outrageous lies

Designed as a drinking game and written in the Baron's own inimitable voice, this is a light and fast role-playing game where you try to out-do each other's astounding accomplishments and legendary feats of derring-do. The rules replace pencils and dice with money and fine wine. The idea here is that you sit around bragging, telling fantastically exaggerated (but completely true!) stories. ("Let me tell you, m'lords, about the time I escaped death by guillotine only by seducing a dyspeptic Bengal tiger.") Other players attempt to derail your story by wagering a token and making an objection ("But surely this was the year of the great Bengal exhibition, when no tigers were to be found in all of Europe? Perhaps it is your dotage, but you clearly must be mistaken.") You either respond with an excuse and by wagering a token of your own, or you swallow your pride and include their objection seamlessly into your story. The game is won after everyone has told one story, and delightfully, each player in turn gives all their tokens to the person they think told the best story. That means that it's the best story that wins, but collecting the most tokens helps you pick the winner.

Best for: creative adults, people who love improvisation, and those who put a great story ahead of trying to win

My rich and crazy aunt is willing her vast fortune to 100 feral cats, but I need the money now; my clown nose manufacturing business is in the toilet and I owe the Mafia a boatload of cash. They're sending a hit man to take care of the problem, but I need to convince her to change her will before she gets taken out. And oh yeah, that so-called "hit man" is a brand new, wet-behind-the-ears assassin who my aunt used to babysit for, and whose older sister I dumped for a floozy half her age.

Honestly, this seemed like such a good idea at the time.

I think of Fiasco as your own Coen Brothers movie in a game. The author describes it best:

Fiasco is inspired by cinematic tales of small time capers gone disastrously wrong – inspired by films like Blood Simple, Fargo, The Way of the Gun, Burn After Reading, and A Simple Plan. You’ll play ordinary people with powerful ambition and poor impulse control. There will be big dreams and flawed execution. It won’t go well for them, to put it mildly, and in the end it will probably all go south in a glorious heap of jealousy, murder, and recrimination. Lives and reputations will be lost, painful wisdom will be gained, and if you are really lucky, your guy just might end up back where he started.

This game is played with 3-5 people in a few hours. You play very human and very flawed characters, each with a powerful need ("the need to become famous;" "the need to get even;" "the need to keep your secrets") and strong relationships. During the game you all work together to come up with and play out completely hilarious, disastrous scenes of greed, desire and ambition.

I once played a game of Fiasco where someone laughed so hard they threw up. Plan accordingly.

Kevin Kulp is a Boston-based storyteller, game designer, and (weirdly enough) expert on shiftwork, fatigue and alertness. A board member for LANES, the League for the Advancement of New England Storytelling (lanes.org), he's a huge proponent of introducing youth to storytelling via great games. He can be reached at @KevinKulp or at kevin.kulp@gmail.com.
Posted by Donna Washington - Storyteller at 10:37 AM

Email ThisBlogThis!Share to TwitterShare to FacebookShare to Pinterest
Labels: Fiasco, Once Upon A Time, The Extraordinary Adventures of Baron Munchausen