Was Satan Ever A Civil Engineer? The Perplexing Traffic In Washington DC 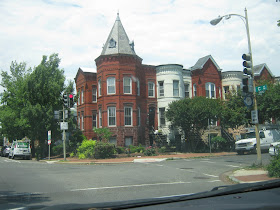 Our nation's capitol is a very interesting place. There are gorgeous buildings, food from every conceivable corner of the world, a rainbow of people, cultures, languages, neighborhoods and libraries.


You can go two blocks and move from a very nice area to a run down area. You could live in a tenement, or a restored Victorian less than a mile apart. In that respect it is like most cities.

The other thing you will find are the most confusing streets ever conceived by a hominid.

This leaves me with a question that has never been properly answered to my satisfaction:

Q: Who the heck is responsible for this fuster-cluck?

B) Satan and a gleeful gaggle of sadistic demons?

C) Someone with a really twisted sense of humor?

E) Someone who wanted make sure that if anyone ever invaded our capitol they would be lost in the first few minutes, unable to figure out how to turn around, confused about how to get out of the turn arounds, unable to figure out which streets were only one way when, caught in the numerous areas where six or seven lanes just collapse into two or three over the course of five hundred feet, and decide that since they'd only been moving at a max of three miles an hour anyway, and it had taken them forty five minutes to go about a mile and a half, they might as well just give up and find a nice place to get a smoothie, take some pictures, and visit a museum.

F) All Of The Above

The night before my show at the Capitol View Library in DC on Tuesday, I google mapped three different routes. The plan was simple: Which of these routes would land me at my destination in the shortest amount of time with the least amount of traffic at 9:15am?

After scoping it out, I decided that rather than going through the middle of the city...suicide...or going around the west side of the city and over the Eisenhower Bridge...close to suicide..and then back through the city on 295...parking lot, I'd try the longest route which was going up the east side, cutting over on rte 6, and taking the longest loop of road.

Five miles down 495 I realized something was wrong. Then, in my rear view mirror I saw the ambulance with its flashing lights picking its way through the cars that were going about ten miles an hour.

I made the executive decision to bail. But that was all right, I still had almost forty five minutes to get to my gig. 495/95 was too far west, so I hopped on 395 going past the Pentagon. The first five minutes I drove right on through clear and easy, and my hopes were high. Then, I got to the first merge. Yup, two lanes merge in from the right and then collapse down while one lane exits on the right to be replaced by two lanes on the left which also collapse. This is called, for want of a more technical term, foolishness.

Luckily, after all of the creeping and apologizing to people silently as I cut in and out of almost stopped traffic, I managed to get off of 295 with ten minutes to burn about one and a half miles from the library.

It took me fifteen minutes to go one mile and a half. I was five minutes late.

Luckily, that was all right. Part of the audience was still filing in when I arrived. It was a day care with fifteen children two years old or younger. At least they could all walk.

My youngest audience member was eighteen months old. My oldest child audience member was eleven. We all had a great time. Didn't tell even one of the folktales they'd advertised I was going to tell. None of them would have been able to hold a two year old. I broke out the crazy. I even got adults, who didn't realize they were going to be called upon to take part, to participate with the kids. Johnny and Suzy Thumb was received enthusiastically by all.

Afterwards, I had a great discussion with a fellow who had grown up in the area and had some interesting observations about the black community. We spoke for almost half an hour.

Got to my second show about an hour and a half before it began at 2pm. It was only five miles away from the first library. Actually, it was almost a straight shot...if DC actually had any roads that could be called a 'straight shot'.

This show was much smaller. Only six kids. When I asked if the kids liked to read, the twelve year old boy did not raise his hand.

"You don't like to read?" I asked.
"Well." He said a bit shamefacedly, "Just comics."
"That's reading!" I exclaimed. "If you like to read comics then you do like to read."

He looked startled, as if that never occurred to him. By the end of the set we were talking about Manga, Attack on Titan, and Black Butler. Then I found out he liked to draw anime, and I assured him that you can make a good living doing that. He seemed surprised by that as well.

Another great show, even some of the grown ups drifted over to play. Fun, fun, fun.

Tired but exhilarated, sweaty and content...I had to drive home on the same hellish streets that dropped me in the middle of the madness.

I love what I do. I can't imagine doing anything else. I wish I had a magic carpet.